Today on the Celtic calendar . . . the feast of St. Columba 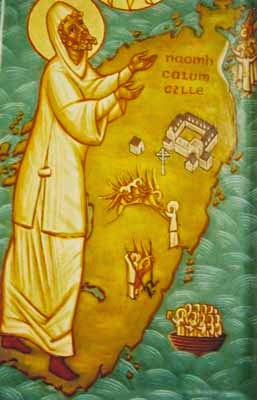 June 9 is the feast of St. Columba, also known as Columcille or "church dove."  Although most commonly associated with Scotland and the island of Iona, Columba began his life in northern Ireland and spent his first forty plus years in that country.  He studied under St. Finnian at Clonnard Abbey (along with St. Brendan) first becoming a monk and later a priest.   It was another Finnian, Finnian of Movilla, who was the catalyst in Columba's exile from Ireland and subsequent founding of the monastic community on Iona.

Columba was a poet at heart and lover of books.  While at Moville, Columba began secretly copying one of their psalters so he could have a copy of the book for himself.  Finnian discovered Columba's activity and, as books were such a rare and precious commodity, insisted that the copy must stay at Moville with the original text.   In what was probably the first battle over copyright issues, the conflict led to a literal battle in which many men were killed and the Irish proverb, "To every cow its calf, to every book its cop," was spawned.

Columba felt remorse over the deaths that followed his action and as others who had been held accountable were exiled from Ireland, he decided to submit himself to the same punishment.  Taking a dozen monks with him, they set forth in a coracle for a place where Columba could no longer see his beloved Ireland.  The monks first landed on the shores of southern Scotland but could still glimpse the green of Erin across the sea so they traveled farther north until they came to the island of Iona.  Columba spent the remaining decades of his life in Scotland, establishing a monastery on the island and continuing the work started by St. Ninian nearly two hundred years earlier in working among the Picts throughout the west and north of Scotland.

The community on Iona was not only the heart of Celtic Christianity in Scotland and Northumbria in the sixth century, it also was key in the Celtic revival of the early twentieth century when the Rev. George MacLeod took a community from Glasgow to rebuild the monastery on Iona and established the ecumenical Iona Community that continues to welcome members and friends committed to justice and peace.

A Prayer Attributed to St. Columba
Be Thou a bright flame before me.
Be Thou a guiding star above me.
Be Thou a smooth path beneath me.
Be Thou a kindly shepherd behind me.
Today and evermore.
Posted by TerriLynn at 12:17 PM No comments:

TerriLynn
Celtic spirituality is my path, poetry is my practice, nourshing and encouraging others by creating a safe space for people to share their stories is my work . . . be it through writing, leading pilgrimages and retreats, teaching meditation or offering spiritual direction. When I'm not doing the above, you can find me reading, drinking tea, digging in the dirt, or satisfying my wanderlust.